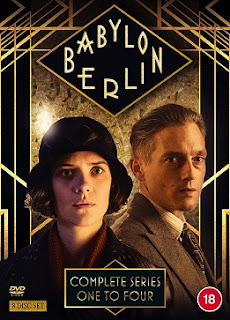 Babylon Berlin Series One to Four Boxset on DVD on December 12th
And to celebrate we have a great competition for you and a copy on DVD to give away.
Synopsis:
The critically acclaimed, multi-award-winning hit German period drama Babylon Berlin returns for its fourth series.. Following the roaring twenties, we enter a new decade at a time of organised crime and political extremism. The old militaristic elites have not yet abdicated, while an even more dreadful monster starts flexing its muscles...
The global hit series is a lavish fare that has seen budgets exceed 40 million dollars and has aired in more than 100 territories.  Babylon Berlin Series Four is set to arrive on DVD and digital on 12 December 2022, alongside the Babylon Berlin Complete Series One to Four Box Set, following its run on Sky.
Series 4 Available at https://amzn.to/3BaPVZy
Babylon Berlin Series Four finds us in 1930s Berlin. The 1920s culminated in the global stock market crash, and the Great Depression and now the Nazis’ march to power is in full swing.  Detective Gereon Rath’s (Volker Bruch) investigations lead him into the boxing milieu – and politically uncomfortably close to Hitler’s militant supporters. His ambitious colleague Charlotte Ritter (Liv Lisa Fries) risks her job to help her homeless sister, who roams the streets of Berlin with a group of young peers, fighting for survival, all the while continuing an ongoing fight for recognition in the male-dominated police department.
There’s a backdrop of dark forces gathering, in an attempt to bring down democracy. But at night, all seems forgotten as the city still dances on the volcano's edge as if there’s no tomorrow…
The cast includes a stellar line-up of German talent Benno Fürmann, Lars Eidinger, Christian Friedel, Udo Samel, Godehard Giese, Fritzi Haberlandt, Karl Markovics and many more.
Take a trip to Babylon Berlin, a spectacular, thrilling, dark and dangerous detective drama set in a time of political upheaval, monumental change and delightful debauchery.
Order from Amazon at https://amzn.to/3UwlVhA
For your chance to win just answer the question below.

Who plays Detective Gereon Rath in Babylon Berlin?
Send your name, address and of course the answer to competition365@outlook.com
Quick Terms and conditions
1. Closing date 19-12-22
2. No alternative prize is available
3. When the competition ends as indicated on this page, any and all entries received after this point will not count and emails blacklisted due to not checking this page first.
4. Winners will be chosen randomly and will be informed via email.
5. Entries that come directly from other websites will not be accepted.
Posted by JD at 11:50