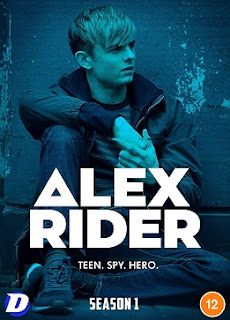 Alex Rider: Season 1 DVD - Released from 3rd October
And to celebrate we have a great competition for you and 2 copies on DVD to give away.
Synopsis:
From creator Guy Bart and based on the hit books by Anthony Horowitz, this exciting adaptation tells the story of Alex Rider, a London teenager who has unknowingly been trained since childhood for the dangerous world of espionage.
Pressured to help investigate his uncle’s death, and how it connects to the assassination of two high profile billionaires, Alex reluctantly assumes a new identity and goes undercover in a remote boarding school called Point Blanc. Isolated far above the snow line in the French Alps, Point Blanc claims to set the troubled teenage children of the ultra-rich back onto the right track. As Alex digs deeper, he discovers the students are in fact the subjects of a disturbing plan which Alex will have to stop, by any means necessary.
Boasting thrilling action and adventure for the whole family, Alex Rider stars Otto Farrant (Mrs Wilson), Vicky McClure (Trigger Point) and Stephen Dillane (Game of Thrones).
Dazzler Media presents Alex Rider: Series One on DVD from 3rd October.
Pre-Order from Amazon at https://amzn.to/3Sxbaej
For your chance to win just answer the question below.

COMPETITION CLOSED
Terms and conditions
1. Closing date 10-10-22
2. No alternative prize is available
3. When the competition ends as indicated on this page, any and all entries received after this point will not count and emails blacklisted due to not checking this page first.
4. Winners will be chosen randomly and will be informed via email.
5. Entries that come directly from other websites will not be accepted.
Posted by JD at 14:39