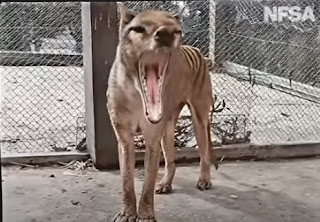 The NFSA has released colourised footage of the last known surviving Tasmanian tiger - or Thylacine - for National Threatened Species Day. Read more about how this black and white footage has been given a new life.

Colourised by Samuel François-Steininger at the Paris-based, Composite Films, from a 4K scan of the negative by the National Film and Sound Archive Australia.