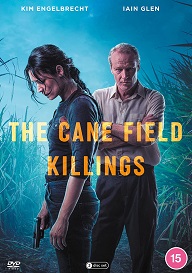 The Cane Field Killings - Released from 30th May
And to celebrate we have a great competition for you and 3 copies on DVD to give away.
Synopsis:
The Cane Field Killings, a brand-new, gritty, and enthralling crime-drama from award-winning writer-creator, Rohan Dickson (The Wild). This South African noir aired as Reyka in South Africa and is the first of its kind, delivering a fresh and unique perspective for audiences across the globe.
Led by a strong female protagonist played by Kim Engelbrecht (The Flash, Raised by Wolves), and a stand-out performance from lauded British actor Iain Glen (Game of Thrones, Resident Evil), The Cane Field Killings boasts high production values, dramatic, visually stunning landscapes, and memorable characters. This refreshing, remarkable thriller is set for its DVD and digital release on 30 May from Acorn Media International.
Brilliant but broken criminal profiler, Reyka Gama (Kim Engelbrecht) returns to her beautiful hometown of KwaZulu-Natal to track down and bring to justice a rampant serial killer who has been violently murdering women, discarding their dead and burnt bodies in the sugarcanes, to be lost forever.
But it soon becomes clear that Reyka’s reasons for returning to her homeland are far more complex than they first appeared, and she finds herself drawn back to the source of a nightmarish childhood trauma that continues to haunt her… a man named Angus Speelman (Iain Glen).
Forced to face her demons both past and present Reyka embarks on a high-stakes fight for the truth amidst a web dark, deadly secrets and deception...
Pre-Order from Amazon at https://amzn.to/3wAk6Gs
For your chance to win just answer the question below.

COMPETITION CLOSED
Terms and conditions
1. Closing date 06-06-22
2. No alternative prize is available
3. When the competition ends as indicated on this page, any and all entries received after this point will not count and emails blacklisted due to not checking this page first.
4. Winners will be chosen randomly and will be informed via email.
5. Entries that come directly from other websites will not be accepted.
Posted by JD at 19:51

Email ThisBlogThis!Share to TwitterShare to FacebookShare to Pinterest
Labels: The Cane Field Killings