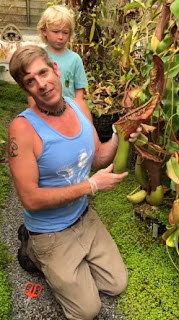 This giant Nepenthes pitcher plant caught and ate a mouse in our carnivorous plant nursery. See what’s left after the digestion!  This happened naturally without any intervention from us. In the wild, these plants will catch small mammals like rats and mice. 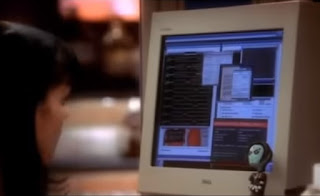 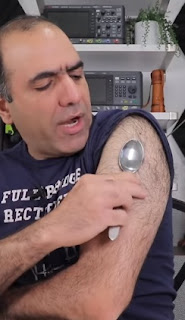 Why should I be exposed to so much nonsense?! They are making me old! Stop believing fake garbage!!

Damien Robitaille, Gurdeep Pandher & Suki perform and dance to PUMP UP THE JAM by Technotronic 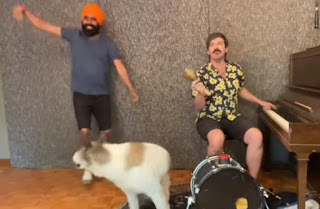 Damien Robitaille, Gurdeep Pandher & Suki perform and dance to PUMP UP THE JAM by Technotronic 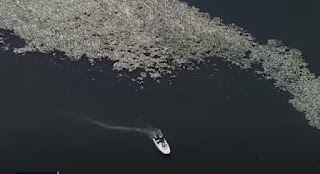 A wave of dead fish arrived near the coast of St. Petersburg days ago. They've been spotted in mangroves, near the shoreline, and out in Tampa Bay. Officials said Tropical Storm Elsa made it worse.

"We’ve collected 15 tons of fish in those 10 days and nine tons of those fish have been picked up in the last 24 hours," a city official explained.

Here's the time-lapse view from SkyFOX showing a large island of dead fish north of the St. Pete Pier and winding through Snell Isle canals. 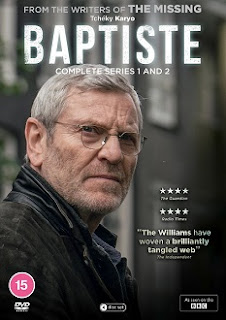 Baptiste Series 1 and 2 Box Set - Released on DVD from 23rd August
And to celebrate we have a great competition for you and 2 Boxsets on DVDs to give away.
Synopsis:
One of TV’s best loved French detectives Julien Baptiste, played by the inimitable Tchéky Karyo, returns for the highly anticipated second and final series of Baptiste and is joined by the fantastic Fiona Shaw. Following its run on BBC One, Baptiste Series Two gets its DVD release this Summer courtesy of Acorn Media International.
Making waves with the hugely successful drama The Missing Series 1 & 2 Julien Baptiste went solo in his own show Baptiste from the same creators/writers Harry and Jack Williams. The gripping six-part crime drama garnered critical acclaim and now both series will be available as Baptiste Series 1 and 2 Box Set alongside Baptiste Series Two on DVD from 23 August 2021 following its premiere on BBC One.
The second series joins Julien Baptiste as a changed man, following a devastating personal tragedy, his life will never be the same again. Having pushed his wife Celia (Anastasia Hille – Keeping Faith) away, he is looking for anything to distract him from his pain, whether it’s alcohol or an all-consuming new investigation… when news reaches him that Ambassador Emma Chambers’ (Fiona Shaw – Killing Eve) whole family has disappeared without trace, he wastes no time in offering his help, knowing that this could be the case he needs.
Travelling to the scene of the crime, he embroils himself in this huge undertaking, and Emma quickly realises that she needs Julien as much as he needs the case. Even though he’s no longer on the force he is the only person that can really help with his experience and capacity for understanding human nature.
It becomes apparent that this isn’t a clear-cut missing persons investigation and soon Julien and Emma are sucked into a dangerous world of terrorism, politics and extremism. As Julien tries to escape his own struggles, will he pay the ultimate price to help find Emma’s family?
Also starring Ace Bhatti (Line of Duty) and BAFTA rising star winner Conrad Khan (County Lines).
For your chance to win just answer the question below.

COMPETITION CLOSED
Terms and conditions
1. Closing date 30-08-21
2. No alternative prize is available
3. When the competition ends as indicated on this page, any and all entries received after this point will not count and emails blacklisted due to not checking this page first.
4. Winners will be chosen randomly and will be informed via email.
5. Entries that come directly from other websites will not be accepted.

Email ThisBlogThis!Share to TwitterShare to FacebookShare to Pinterest
Labels: Baptiste 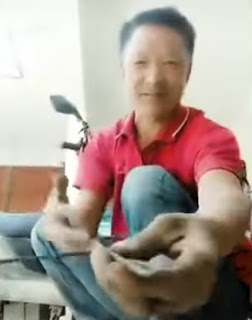 This is the steel bar used in the construction of a building in China. Its fragility is disturbing. In China, it’s everyone's dream to own their own home. China's real estate industry is arguably the largest in the world. The majority of Chinese people's savings are invested in their homes. But the quality of China's housing construction has always been a concern for buyers and residents alike. The Chinese refer to buildings that are of poor quality or even have serious safety problems as tofu-dreg projects.

These are just some of the tofu-dreg projects in China so far this year. The term "tofu-dreg" was first coined by former Chinese Premier Zhu Rongji. After he inspected the collapse of floodwalls in a southern city in 1998, the Premier angrily criticized it as a "tofu-dreg project" when asked about the cause of the failure. Since then, the term "tofu-dreg construction" has appeared frequently in all major Chinese media and has gradually become well known.

More than two decades later, the collapse of "tofu-dreg" projects in China has not disappeared or decreased. Instead, it has become more frequent. It keeps repeating itself and eventually becomes a characteristic of China that is known by the world. 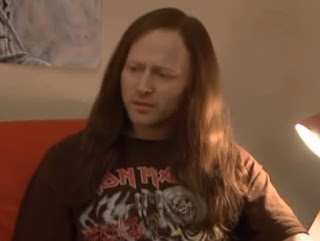 COMPETITION: Win My Life is Murder Series One on DVD 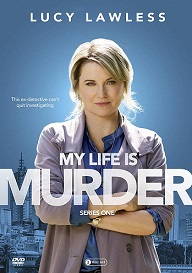 My Life is Murder Series One - Released on DVD from 16th August
And to celebrate we have a great competition for you and 3 DVDs to give away.
Synopsis:
Award-winning Lucy Lawless, best known as Xena: Warrior Princess, now takes the lead in one of Australia’s most popular crime dramas: My Life is Murder. Now the first series of this entertaining show is set for its UK DVD release from Acorn Media International and is also streaming on Acorn TV.
Lucy Lawless (Parks and Recreation) is retired cop Alexa Crowe, but her ex-boss (Bernard Curry – Once Upon a Time) is persistently on her case to help with cold cases and rookie police data-analyst (Ebony Vagulans) is hassling Alexa to be her mentor… so her detective days may not be over just yet.
When she’s asked to investigate the case of a woman who had fallen from the 19th floor apartment of a male escort called Dylan Giroux, she’s desperate to know did she fall, or was she pushed? It doesn’t take long for Alexa to be back in the game, putting her crime-solving nous to good use as an intrepid private investigator.
Tenacious and unapologetic, Alexa brings her dry wit and brash style as she contends with a suspicious death at a competitive culinary school, a murder in an exclusive cycling club, a locked-room mystery, and more.
Pre-order on Amazon: https://amzn.to/3s1mkvP
For your chance to win just answer the question below.

COMPETITION CLOSED
Terms and conditions
1. Closing date 23-08-21
2. No alternative prize is available
3. When the competition ends as indicated on this page, any and all entries received after this point will not count and emails blacklisted due to not checking this page first.
4. Winners will be chosen randomly and will be informed via email.
5. Entries that come directly from other websites will not be accepted.

Email ThisBlogThis!Share to TwitterShare to FacebookShare to Pinterest
Labels: My Life is Murder

UPDATE: Natasha Is No Longer Homeless 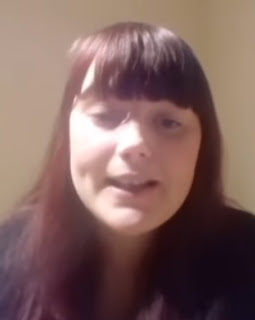 July 3, 2012, was a rainy night in London. I had just arrived from the airport. I was jetlagged with my head pounding. I went for a walk to get some food and there she was. I didn't have a camera with me, so I recorded a short video with my phone. Here is a link to Natasha's first video: https://youtu.be/6TLVgwoqhoc

Overnight the video reached over 169,000 views on YouTube and started a conversation about welfare reform in the UK that was just gorgeous.

I searched online constantly. I searched Google, and I searched social media. I could not find her. Someone started a fundraising page for Natasha, but they didn't have any connection to her, and I don't think the person they found was the same girl. I was concerned for her, and concerned people were using her video to make money. Over the last six years, I aggressively tried to find Natasha.

A week or so ago I received a message request on Facebook. Seems some woman had been trying to get my attention, but I never see the requests. I forget that feature is even there. That woman turned out to be Natasha - the real Natasha - the young homeless girl I had met sleeping rough in London six years ago. She found me.

There are no words to describe how happy I was that she reached out to me and how utterly ecstatic I was she was no longer homeless. Natasha is now a young mother. She lives with her partner trying to make the best of it. She works three jobs trying to survive. So often the end of homelessness just starts new challenges.

Every single day someone contacts me asking about Natasha and how they can help. I have been messaging with Natasha back and forth, and since so many of you wanted to help her, I suggested she start a GoFundMe page.

This is Natasha's GoFundMe page: https://www.gofundme.com/f/54qyw-no-longer-homeless I have validated it is her. Although I made the suggestion, all donations go directly to her. She set up the page herself.

From talking to Natasha, I learned that they don't have a lot of furniture. Like I said, she works three jobs. That's got to be hard on a young family. 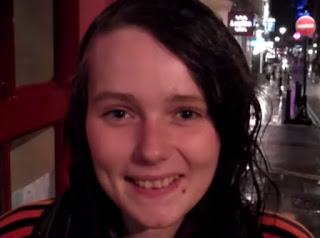 Natasha is 22 years old and has been homeless in London for four years. Only moments before meeting her on a dark rainy night I met two other homeless women. One woman had been on the streets for 33 years.

Natasha says because she is not using drugs or alcohol or pregnant there is no help.

It's hard to imagine what a young girl like Natasha's life is like on the streets. It's nothing but a miracle that she still is positive and can smile. 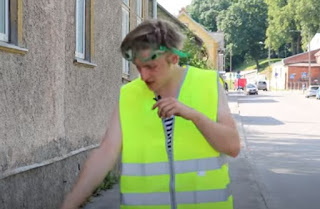 We did it again. Repaired pavements, signs, benches, oiled squeaky swings, and more.