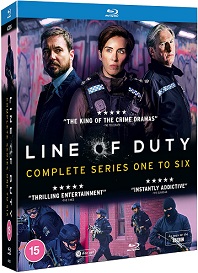 Line of Duty - Series 1-6 Complete Box Set Blu-ray is released on July 12th
And to celebrate we have a great competition for you and one to give away.
Synopsis:
WITH UNIVERSAL praise from critics and viewers alike, lauded as ‘The King of the crime dramas’, ‘Exhilarating, white-knuckle ride’ and ‘Thrilling entertainment’, the internationally acclaimed ratings record-breaker Line Of Duty finally gets the high-def treatment as Line of Duty Complete Series One To Six is set to be released as a bumper Blu-ray box set release.
Following its rollercoaster return to the BBC earlier this year, with its highly anticipated sixth series, the explosively thrilling TV behemoth, from award-winning scribe Jed Mercurio (Bodyguard, Bloodlands), can now be enjoyed in full on Blu-ray from 12 July 2021.
Line of Duty Complete Series One To Six Blu-ray follows the police corruption unit AC-12, made up of our favourite team as they take on ‘bent coppers’ – Superintendent Ted Hastings (Adrian Dunbar – Blood, Broken), Detective Inspector Kate Fleming (Vicky McClure – This Is England, The Secret Agent) and Detective Sergeant Steve Arnott (Martin Compston – The Nest, Traces).
This addictively intense police drama has earned a legion of fans with its ‘nail biting action, complex characters, and intricate plot’ (TV Guide). At anti-corruption unit AC-12, Superintendent Ted Hastings leads his team of DS Steve Arnott and DC Kate Fleming in their suspected police corruption investigations…in the process, they begin to uncover a conspiracy that reaches to the very highest echelons of the force.
Each series sees a phenomenal acting talent take on the role of the police officer being investigated and takes us on a ride that keeps us guessing with its heart-stopping interrogations and intricate plots. The show features a stand-out cast including Craig Parkinson, Neil Morrissey, Maya Sondhi, Nigel Boyle, Anna Maxwell Martin, Polly Walker and Shalom Brune-Franklin, who play some of the series’ most memorable characters.
SERIES ONE: Lives and careers are on the line following the investigation into DCI Tony Gates (Lennie James –  Save Me, The Walking Dead)
SERIES TWO: When a police convoy is ambushed, AC-12 pursue sole survivor DI Lindsay Denton (Keeley Hawes – Bodyguard, It’s A Sin)
SERIES THREE: Foul play is suspected when Sgt Danny Waldron (Daniel Mays – Des, Guerilla) fatally shoots an unarmed criminal.
SERIES FOUR: When DCI Roz Huntley (Thandiwe Newton – Westworld, Crash)) catches a serial killer, AC-12 are alerted to a possible miscarriage of justice.
SERIES FIVE: When three officers are shot during the hijack of a seized drugs haul an investigation follows, Stephen Graham (The Virtues, This is England) stars.
SERIES SIX: AC-12 investigate the apparent mishandling of a journalist's murder inquiry, led by DCI Jo Davidson (Kelly Macdonald – Giri/Haji, Trainspotting).
Pre-Order on Amazon at https://amzn.to/3hhtatf
For your chance to win just answer the question below.

COMPETITION CLOSED
Terms and conditions
1. Closing date 19-07-21
2. No alternative prize is available
3. When the competition ends as indicated on this page, any and all entries received after this point will not count and emails blacklisted due to not checking this page first.
4. Winners will be chosen randomly and will be informed via email.
5. Entries that come directly from other websites will not be accepted.