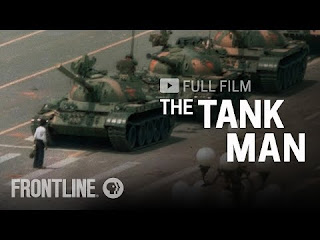 On June 4, 1989, Chinese troops expelled thousands of demonstrators from Tiananmen Square, killing an unknown number. One day later, a lone protester stood his ground before a column of tanks.

The iconic image of the Tank Man, captured by Western photographers, was one China never wanted the world to see. In 2006, FRONTLINE investigated the mystery of the Tank Man — his identity, his fate, and his significance.