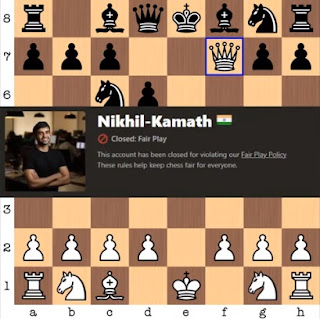 Nikhil Kamath, India's youngest billionaire, took part in a charity event (Checkmate Covid) on June 13th, 2021. During the event he had the opportunity to play in a chess simul against 5-time World Chess Champion Viswanathan Anand. Nikhil Kamath's play in his game against Vishy Anand was 98.9% accurate. The accuracy of Nikhil Kamath's games only 3 days earlier however were far less accurate. Featured in this video are 4 games played by Nikhil Kamath, whose account on chess.com was closed for violating their "Fair Play Policy".