COMPETITION: Win We Children From Bahnhof Zoo on DVD 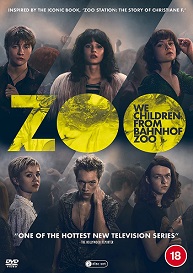 We Children From Bahnhof Zoo - Released on DVD from 14th June
And to celebrate we have a great competition for you and 2 copies on DVD to give away.
Synopsis:
The memoirs of Vera Christiane Felscherinow a teenager growing up in West Berlin in the 1970s were told in the mind-blowing bestseller We Children From Bahnhof Zoo aka Zoo Station: The Story of Christiane F., which shocked the world with its explicit tales of partying, drug-use, prostitution and the devastating aftermath. In 1981 it was adapted for the big-screen in cult-classic Christiane F. and now a brand-new TV adaptation brings this dark story bang up to date in a slick, gritty ride through the world of teenage life and the descent into destruction.
We Children From Bahnhof Zoo follows the life of Christiane and her tight-knit group of like-minded souls who are trying to find out who they are, what they want to do with their lives and where the next party’s at. This eight-part German series originally aired on Amazon and courtesy of Acorn Media International is now available on digital to buy and keep and arrives on DVD 14 June 2021.
With its stylish wardrobe and astounding night-club scenes, it has echoes of Babylon Berlin, and director Philipp Kadelbach (Generation War, SS-GB) brings a modern spin with a killer soundtrack from the 1970s, including a feast of Bowie greats, interspersed with a thumping mix of genres from techno to punk, hip-hop to dancehall and more, to create a cutting-edge thrill-ride.
As the six friends struggle to find their place in the world, their hedonistic lifestyle amidst Berlin’s seedy nightlife, leads them into the dark and dangerous world of drugs, prostitution and addiction.
We follow their rough ride into adulthood that sees Christiane’s (Jana Mckinnon – The Trouble With Being Born, Darktown) gradual descent into heroin addiction while Benno’s (Michelangelo Fortuzzi – Naked Animals, Druck) habit drives him to lengths he never imagined while paranoid Axel’s (Jeremias Meyer – The Old Fox, Vampire Sisters) heartbreaking adoration of Christiane persists and Michi (Bruno Alexander – World On Fire, Eden), secretly in love with Benno competes with  Christiane for his affection. Will they be able to overcome their addictions or will they be consumed by them?
This visually stunning, wild and daring take on the harsh realities of life once the partying stops, is an edgy coming of age drama that veers from dreamlike and trippy, to dark and poignant.
Pre-order on Amazon: https://amzn.to/3uWfUhi
For your chance to win just answer the question below.

COMPETITION CLOSED
Terms and conditions
1. Closing date 21-06-21
2. No alternative prize is available
3. When the competition ends as indicated on this page, any and all entries received after this point will not count and emails blacklisted due to not checking this page first.
4. Winners will be chosen randomly and will be informed via email.
5. Entries that come directly from other websites will not be accepted.

Email ThisBlogThis!Share to TwitterShare to FacebookShare to Pinterest
Labels: We Children From Bahnhof Zoo