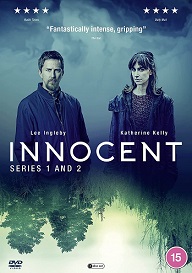 Innocent - Series 1-2 Box Set - Released on DVD from 28th June
And to celebrate we have a great competition for you and 2 copies on DVD to give away.
Synopsis:
This dark and thrilling four-part drama, penned once again by dynamic duo writing team Chris Lang (Unforgotten) and Matthew Arlidge (Silent Witness), airs over consecutive nights and Innocent Series Two and arrives on DVD alongside the Innocent Series One and Two Box Set on 28 June 2021, courtesy of Acorn Media International.
When 16-year-old school-boy, Matty Taylor is found dead, brutally stabbed with a broken cider bottle, suspicion falls on his teacher Sally Wright (Kelly), who had allegedly been having an affair with him.
Following a murder conviction and a lengthy sentence, new evidence comes to light and Sally is released from prison and free once more…or is she?  The case has all but destroyed the life she once had, a stable marriage, a nice home and a good job teaching English at a local comprehensive, now her reputation is in tatters and her life will never be the same again.
Filled with suspicion, secrets and lies, this enthralling drama will have you desperate to know who is guilty.
Pre-order on Amazon: https://amzn.to/35D96uX
For your chance to win just answer the question below.

COMPETITION CLOSED
Terms and conditions
1. Closing date 05-07-21
2. No alternative prize is available
3. When the competition ends as indicated on this page, any and all entries received after this point will not count and emails blacklisted due to not checking this page first.
4. Winners will be chosen randomly and will be informed via email.
5. Entries that come directly from other websites will not be accepted.

Email ThisBlogThis!Share to TwitterShare to FacebookShare to Pinterest
Labels: Innocent