First Flight on Another Planet! 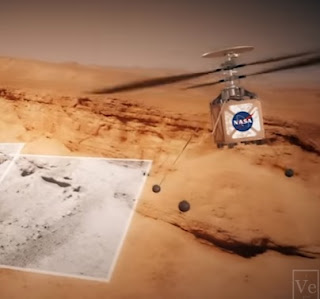 The Mars Helicopter aims to make the first powered flight on another planet when it takes off on Mars as part of the Mars 2020 mission. I learned a lot getting to visit the drone right before it was mounted on the rover.

How do you fly in 1% of Earth's atmosphere:
Have large rotors (they are 1.2m in diameter) and spin them very fast, around 2500 RPM (5x the speed of a helicopter on Earth).

Plus the aircraft has to be light:
The Mars helicopter weighs in at 1.8kg or around the same as a laptop. Every piece had to be stripped down for weight. Instead of using aerogel for insulation, the craft makes use of CO2 gaps between components. Even aerogel was too heavy!

One of the major challenges is surviving the Martian night:
Temperatures plunge to -80C to -100C so two thirds of the craft's power is actually used to keep its electronics warm. Only one third is used for flying. The estimated flight time is 90 seconds.

The craft can't be driven remotely, it will have to fly autonomously, using its own sensor suite to determine how to fly. The round trip 20 minute delay with Earth means steering the craft from mission control would be impossible.