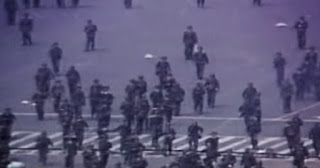 In 1989, hundreds of thousands of people flooded onto the streets of Beijing and into Tiananmen Square demanding democracy, freedom of speech and an end to corruption.

After a seven week standoff, the government called in the troops and a bloody battle ensued.

The number of deaths is not known. The Chinese Red Cross initially issued a statement saying that 2,600 people had been killed but rapidly retracted that. The Chinese government claimed that 241 people died, including 23 soldiers.

Twenty years on, Al Jazeera speaks to some of those who took part in the world's largest and most influential pro-democracy movement.

Through their personal stories and the stories of others who witnessed this historic movement, It happened in Tiananmen Square recreates an era when a new generation of Chinese wanted to finally break from the shackles of Mao's Cultural Revolution.

It happened in Tiananmen Square aired from Sunday, May 31, 2009.