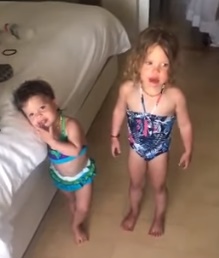 A father of three has a trick up his sleeve to stop his daughters from crying and whining.

The father recorded the sweet moment both his daughters calm down after throwing hysterical tantrums after they refuse to take "their turn to cry" during their holiday in Cabo San Lucas, Mexico on April 25.

The trick works every time for the dad of a one, three and six-year-old saying: "I figured it out with one of my daughters a long time ago. Works every single time."