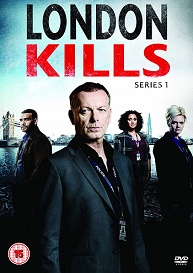 London Kills - Series 1 is released on DVD on July 1st

Synopsis
From the creator of Suspects comes gritty, gripping new police drama London Kills. London's best detectives take on its worst crimes in this slick and thrilling mystery series which sees the world’s most exciting city as the backdrop for a string of killings – all investigated by an elite murder squad.

Delving into the gruesome metropolitan murders that are all part of his day job, David  must grapple with the constant pain of not knowing what has happened to his loved one. As suspicions are raised, he has to put his personal issues aside to focus on his job and learn to trust his colleagues….but can he solve the case closest to him?

Created by crime TV don Paul Marquess, known for his work on The Bill, M.I.T.: Murder Investigation Team, Crime Stories and Suspects, London Kills is the perfectly polished result of the passion and expertise of a true police procedural aficionado. Shot documentary style on hand held cameras, this nail-biting drama will keep you on the edge of your seat.

London Kills will be available on DVD and digitally to download and keep from iTunes, Amazon Prime Video and Google Play.

Buy from Amazon Here (Opens in a new window)


Terms and conditions
1. Closing date 08-07-19
2. No alternative prize is available
3. When the competition ends as indicated on this page, any and all entries received after this point will not count and emails blacklisted due to not checking this page first.
4. Winners will be chosen randomly and will be informed via email.