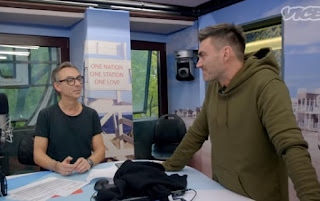 When Eiffel 65 released 'Blue (Da Ba Dee),' it was a flop. They sold around 200 records, shrugged it off as a loss, and forgot about it. But in a wild turn of events, the track got picked up by a small local station before getting airplay on one of the biggest radio stations in Italy—and within days, it was steamrolling its way to becoming one of the biggest hits of the late 1990s, taking the electronic music group touring around the world as their song shot up the charts.

We met up with the members of Eiffel 65—Jeffrey Jey, Maurizio “Maury” Lobina, and Gabry Ponte—to find out the origin story behind "Blue," and hear what it was like to become international superstars in the blink of an eye.