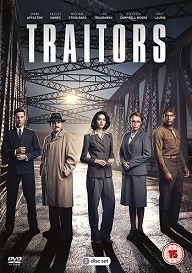 Traitors is released on 1st April

Synopsis
Set in 1945, this epic drama follows an intern, played by Emma Appleton, turned double agent in a dark and dangerous new world.

Created and written by Boardwalk Empire scribe Bash Doran in her first original commission for British TV, and starring a stellar line-up including Luke Treadaway (Ordeal by Innocence, Fortitude) Stephen Campbell Moore (The Last Post, The Child in Time) and Matt Lauria (Kingdom, Parenthood), this enthralling series begins after the Second World War as Britain, America and Russia are all vying for a new world order.

This coming of age female spy story follows Feef Symonds (Appleton – Clique, Grantchester), a gutsy, determined, but naïve 21-year-old, struggling to define herself in a bewilderingly fast-changing world. When she accepts a position with the British Civil Service alongside the formidable and forward-thinking Priscilla (Hawes – Line of Duty, The Missing), she hopes to finally utilise her spy training picked up during the war. But her allegiances are about to be called in to question.

In the aftermath of a shock election win by the Labour Party lead by Clement Attlee, there is unrest across the water and an American agent, Rowe (Michael Stuhlbarg – Shape of Water, The Post), targets Feef to spy on her own country. Accepting the challenge, she is about to discover a shocking secret that could put her life in grave danger…has she made a terrible mistake?


Terms and conditions
1. Closing date 08-04-19
2. No alternative prize is available
3. When the competition ends as indicated on this page, any and all entries received after this point will not count and emails blacklisted due to not checking this page first.
4. Winners will be chosen randomly and will be informed via email.

Email ThisBlogThis!Share to TwitterShare to FacebookShare to Pinterest
Labels: Traitors