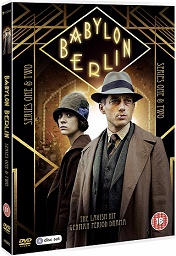 Babylon Berlin - Series 1 and 2 is released on 1st April

Synopsis
THE CRITICALLY acclaimed, multi award winning hit German period drama Babylon Berlin follows a young police inspector uncovering a tangled web of corruption amongst the political, social and sexual extremes of the Weimar Republic. Making waves at home and internationally after its run on Sky Atlantic, and with its third series due later this year, Babylon Berlin Series One & Two Box Set is set to arrive on DVD courtesy of Acorn Media International.

The lavish, $40m series is Germany’s most expensive drama to date, and explores a metropolis in turmoil: growing poverty stands in stark contrast to the excesses and indulgence of the night life in 1929 Berlin.

Gereon Rath (Volker Bruch), an ex-soldier from Cologne, is transferred to Berlin to investigate one of Berlin’s biggest pornography rings, together with stenotypist Charlotte Ritter (Liv Lisa Fries) and his partner Bruno Wolter (Peter Kurth). Rath is forced into an existential conflict, torn between loyalty and uncovering the truth as an even greater conspiracy unfolds: Soviet rebels confronting the rise of National Socialism. Berlin’s police headquarters increasingly become the melting pot of a democracy whose days are numbered.

The social climate and political factors that coalesce into a growth in power of the populist far-right has striking political relevance even now, 90 years after the show is set. With a rare 100% critics consensus on Rotten Tomatoes, Babylon Berlin is perfect for your next box set binge.


Terms and conditions
1. Closing date 08-04-19
2. No alternative prize is available
3. When the competition ends as indicated on this page, any and all entries received after this point will not count and emails blacklisted due to not checking this page first.
4. Winners will be chosen randomly and will be informed via email.