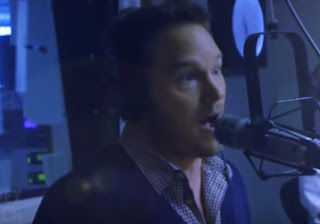 I synced up Chris Pratt rapping to Forgot About Dre with the original backing track. Original video here:

Creation process: Downloaded the original acapella and backing track. Brought them into Adobe Audition and synced them up with the full song. Then, muted everything but Eminem's vocals and spent a long time splitting and time stretching Pratt's vocals to line up exactly with the Eminem vocals. Added a vocal chain to Chris' vocals, and added a hard limiter to the whole thing. Muted Eminem's vocals, unmuted the backing track and exported the audio. Took it into Premiere, where I did the same splitting and time stretching process with the video as I did with the audio. (I could have done this in Audition, but I forgot). Synced my exported audio with the video I just made. Added the Dr. Dre part of the music video to the beginning. Used RGB Curves to tint the video, except for the pause in the middle. Exported that video and brought it into After Effects. Added a lens flare and motion tracked it to the video. Faded it out for the pause in the middle. Added the letter box, also fading them out for the pause. Went to Photoshop to create a curved picture of Chris, brought that back into After Effects. Motion tracked that into the magazine. Added my watermark. Export video. Done.