The Best People's Court Ending Ever 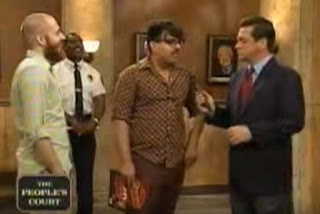 "Defendant Joe Somar, of the band 'The Fugue', on People's Court, explaining why his life is hard."

From Joe Somar himself:
"The story behind the court appearance was back when I lived in Brooklyn, I worked for a crappy bike shop in New York City. Not going to plug their name because that place sucks. This guy brings in this lemon of a electric bike and demands me fix it. We tell him we can't but he won't let us give it back. I tried to call him over and over for months, telling him to take the turd back but no dice. Finally, I just chuck the thing out.

I had initially planned to rip my shirt off and do a huge WWE-style interview if I won challenging the plaintiff to take me on in other courts (Divorce Court, Night Court, a basketball court) but i kind of blanked out and just pulled that speech out of my ass. I have no idea why I said I felt emancipated. I probably got it from watching too much Law & Order. No wait, there is no such thing as too much Law & Order.