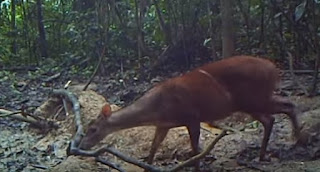 'An Unseen World' is one of 5 films that won an Award at the International Forests Short Film Festival. The film weaves together camera trap footage taken on an Amazon Rainforest tributary located in the Madre de Dios region of Peru. It represents nature film making at its most raw and innovative - a stark drama of unfolding forest life as it happens. The film gives us a glimpse of the rich biodiversity of the region -- from patrolling pumas and hunting jaguars to curious anteaters. Explorer, writer and film maker, Paul Rosolie, was awarded at UNFF10 in Istanbul, Turkey on 10 April 2013.

The United Nations Forum on Forests Secretariat partnered with the Jackson Hole Wildlife Film Festival to honor the creative efforts of film makers who capture dynamic and unique relationship between forests and the people who depend on them. This year's Film Festival was for short films of five minutes or less. 128 entries from 38 countries competed to win at the prestigious Festival.