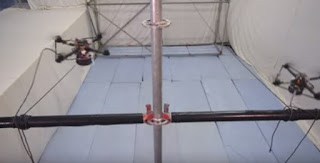 
The video shows quadrocopters autonomously assembling a rope bridge. This is part of a body of research in aerial construction, a field that addresses the construction of structures with the aid of flying machines.

In this work, a rope bridge that can support the crossing of a person is built by quadrocopters, showing for the ﬁrst time that small ﬂying machines are capable of autonomously realizing load-bearing structures at full-scale and proceeding a step further towards real-world scenarios. Except for the required anchor points at both ends of the structure, the bridge consists exclusively of tensile elements and its connections and links are entirely realized by ﬂying machines. Spanning 7.4 m between two scaffolding structures, the bridge consists of nine rope segments for a total rope length of about 120 m and is composed of different elements, such as knots, links, and braids. The rope used for these experiments is made out of Dyneema, a material with a low weight-to-strength ratio and thus suitable for aerial construction. Of little weight (7 g per meter), a 4 mm diameter rope can sustain 1300 kg.

The vehicles are equipped with a motorized spool that allows them to control the tension acting on the rope during deployment. A plastic tube guides the rope to the release point located between two propellers. The external forces and torques exerted on the quadrocopter by the rope during deployment are estimated and taken into account to achieve compliant ﬂight behavior. The assembly of the bridge is performed by small custom quadrocopters and builds upon the Flying Machine Arena, a research and demonstration platform for aerial robotics. The arena is equipped with a motion capture system that provides vehicle position and attitude measurements. Algorithms are run on a computer and commands are then sent to the ﬂying machines via a customized wireless infrastructure.

In order to be able to design tensile structures that are buildable with flying robots, a series of computational tools have been developed, specifically addressing the characteristics of the building method. The design tools allow to simulate, sequence, and evaluate the structure before building.

The location of the scaffolding structure is manually measured before starting the construction. The primary and bracing structure can then be realized without human intervention. Before realizing the stabilizers, the locations of the narrow openings of the bridge are measured and input to the system, which adapts the trajectories accordingly.
Posted by JD at 16:16