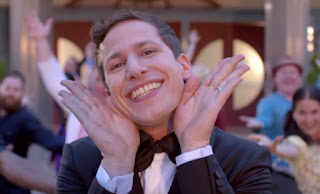 The opening film from the 67th Annual Emmy Awards

"Andrew "Andy" Samberg (born August 18, 1978) is an American actor, comedian, singer, writer and producer. He is a member of the comedy group The Lonely Island and was a cast member on Saturday Night Live (2005–2012), where he and his fellow group members have been credited with popularizing the SNL Digital Shorts.

Samberg has starred in films, such as Hot Rod, I Love You, Man, That's My Boy, Celeste and Jesse Forever and Hotel Transylvania. He currently stars in the workplace sitcom Brooklyn Nine-Nine, for which he won a Golden Globe for best actor in a comedy series in 2014."
Posted by JD at 15:56