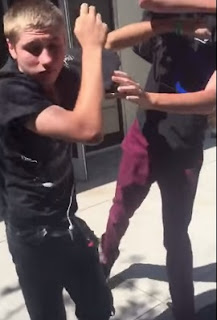 So a bully decides to fight a blind kid. Then another kid comes in and destroys the bully!
We don't know much about this video, other than it was put on Youtube today by someone called Matt, he claims he doesn't know the people in the video, nor did he film it, but it was sent to him.