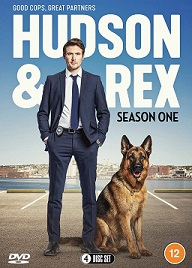 Hudson & Rex Season 1 - Released on DVD from 9th August
And to celebrate we have a great competition for you and a copy on DVD to give away.
Synopsis:
Own the action-packed, hit television series Hudson & Rex, and meet this loveable crime-fighting duo in their very first season…
Detective Charlie Hudson (John Reardon, Van Helsing, Continuum), a cunning Major Crimes detective for the St. John’s Police Department, teams up with an unusual partner, Rex, a former-K9 German Shepherd whose heightened senses keep Charlie hot on the trail of his suspects. Together, they investigate puzzling crimes, from a kidnapping which reveals a much larger conspiracy at play, to an art theft murder which runs deep into the world of high society. With Charlie’s deft detective work and Rex’s keen canine senses, this crime-fighting pair is unstoppable.
Providing plenty of action and excitement for the whole family, Hudson & Rex became the highest-rated original scripted series for Canadian television network Citytv and is shown in more than 100 territories worldwide.
Dazzler Media presents Hudson & Rex: Season One on DVD and Download-to-Own from 9th August
Pre-order on Amazon: https://amzn.to/3rzJ9GO
For your chance to win just answer the question below.

Hudson & Rex originally aired in which Canadian television network?
Send your name, address and of course the answer to competition365@outlook.com
Terms and conditions
1. Closing date 16-08-21
2. No alternative prize is available
3. When the competition ends as indicated on this page, any and all entries received after this point will not count and emails blacklisted due to not checking this page first.
4. Winners will be chosen randomly and will be informed via email.
5. Entries that come directly from other websites will not be accepted.
Posted by JD at 09:06