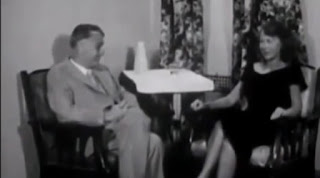 In 1956 this unnamed American housewife took LSD at the Veteran's Administration Hospital in Los Angeles. This woman's husband was an employee at the hospital and referred her to this study, which was reportedly done for a television program on mental health issues.

This video was found by biographer Don Lattin.

Email ThisBlogThis!Share to TwitterShare to FacebookShare to Pinterest
Labels: LSD