Failed Cash-In-Transit Heist Because Driver Has Balls Of Steel 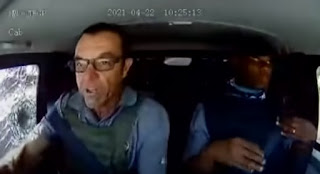 On April 22, 2021 a cash-in-transit heist failed due to the evasive maneuvers and balls of steel this driver has.

Police spokesperson Brigadier Vishnu Naidoo said a group of men tried to rob the CIT vehicle on 22 April on the N4 in Pretoria, South Africa. As the suspects begin firing at the armored van, the driver keeps his composure extremely calm and passes his rifle to his partner.

The driver taking full control of the situation begins maneuvering his vehicle, ultimately pulling a U-Turn and heading straight at the suspects. Warning his partner moments before, "They are going to shoot" as they both brace for what's about to happen. Multiple shots make contact with the armored van as the by-pass the suspects car approaching, but luckily neither of them were hit.

Unfortunately the footage cuts off a few seconds after they pass the armed suspects, but the driver exited the vehicle what seemed to be safely.

The driver in this video is Leo Prinsloo, a former member of the SAPS Special Task Force, and also the head instructor for Fortis Pro Active Defence’s Lone Operator courses. Leo also is the founder of The Edge Shooting Academy in Centurion