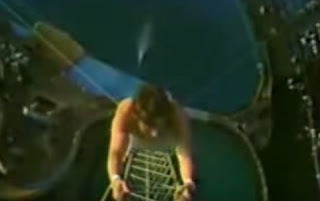 There is considerable debate surrounding record claims for the highest dive, which largely revolves around criteria for what constitutes a valid dive.

ABC's Wide World of Sports produced world record high dives for its Emmy award winning sports anthology show for more than a decade. They required contestants to dive or execute at least one somersault and exit the water without the assistance of others.

In 1983 Wide World of Sports produced its last World Record High Dive at Sea World in San Diego. Five divers (Rick Charls, Rick Winters, Dana Kunze, Bruce Boccie and Mike Foley) successfully executed dives from 172 ft. In 1985 Randy Dickison dove from 172 ft at Ocean Park in Hong Kong but sustained a broken femur and could not exit the water on his own. In 1987 Olivier Fave attempted a double back somersault from 177ft but broke his back upon impact and had to be rescued. Laso Schaller's 2015 jump from a 193 ft cliff in Switzerland is not considered a dive.